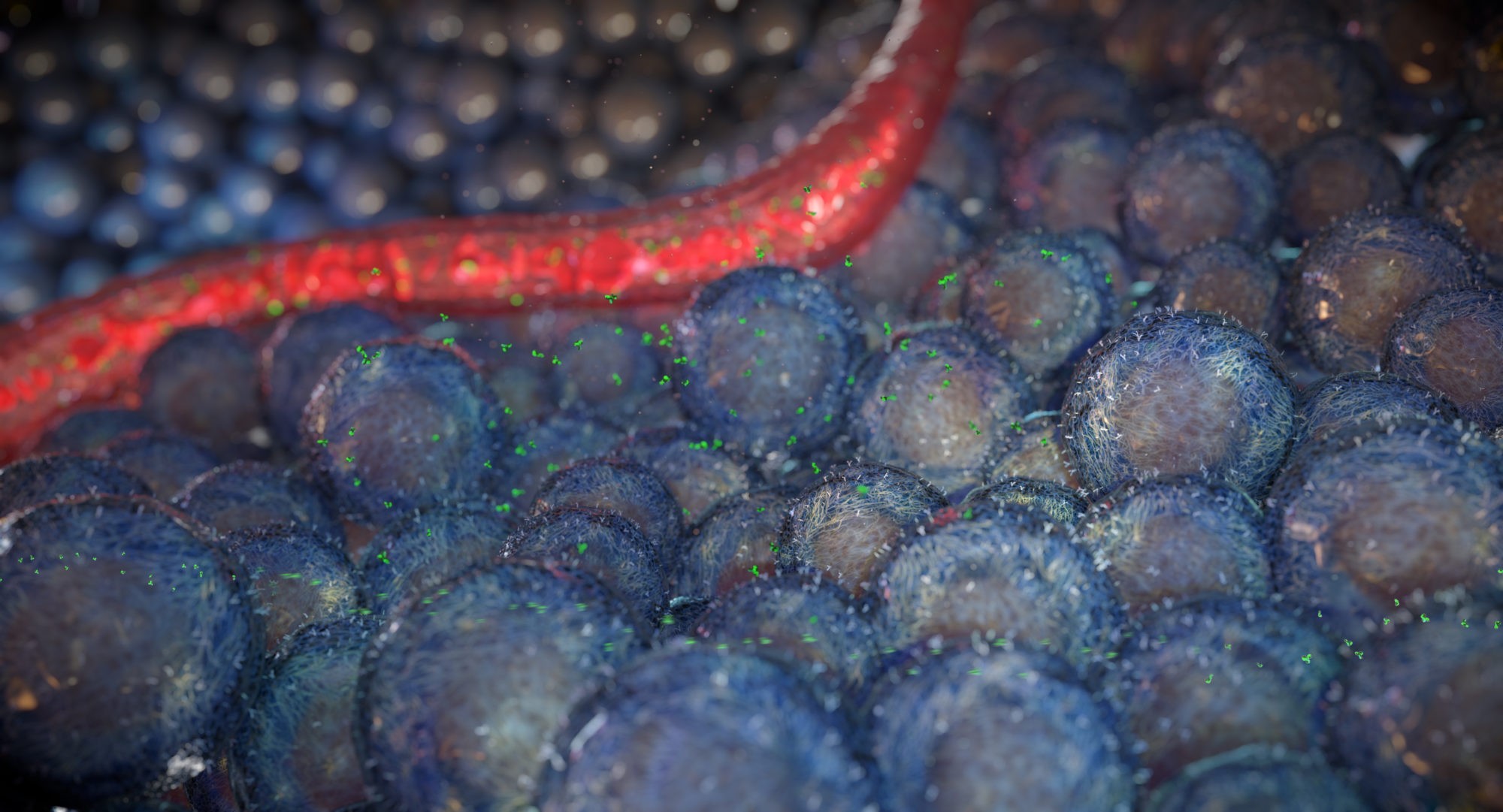 Our medical animation studio pays attention to the most intricate and exciting, aspects of medicine. Here, we will talk about one of the critical medical questions, that was converted into an excellent tumor immune response MoA animation.

What is tumor immune response MoA animation about

Important scientific discoveries in recent years have led to an increase in our understanding of the role of helper T-cells that are visualized in this tumor immune response MoA animation. T-cells are either cytotoxic (CD8+) or helpers (CD4+). Unlike antibodies, which react with intact proteins only, the CD8+ T-cells react with peptide antigens expressed on the surface of a cell. Peptide antigens are those that have been digested by the cell and presented as peptides displayed in the MHC. MHC-encoded molecules govern immune responses by presenting antigenic peptides to T-cells. The peptide and the MHC together attract T-helper cells. CD8+ T-cells are specific for class I MHC molecules, while CD4+ T-cells are specific for class II MHC molecules. After attaching to the MHC-peptide complex expressed on a cell, the CD8+ T-cell destroys the cell by perforating its membrane with enzymes or by triggering an apoptotic or self-destructive pathway. The CD8+ T-cell will then move to another cell expressing the same MHC-peptide complex and destroy it as well. In this manner, cytotoxic T-cells can kill many invasive cells. Ideally, CD8+ T-cells could engender a very specific and robust response against tumor cells. Cytotoxic T-lymphocytes (CTL) are considered to be essential effectors of the cell-mediated immune response. The ability of CTL to specifically recognize and lyse malignant cells expressing the relevant surface antigens under optimal in vitro conditions justifies attempts to boost their number and activity through various forms of immunotherapy (Titu et al., 2002).

The immunological response to the foreign tissue proteins comprises two limbs: an afferent or sensitizing limb and an efferent or effector limb (Gowans et al., 1962). T-cell activation begins when T-cells recognize intracellularly processed fragments of foreign proteins embedded in the groove of the MHC proteins, expressed on the surface of APC (Krensky et al., 1990; Weiss & Littman, 1994). CD4 and CD8 proteins, expressed by peripheral blood T-cells, bind to human leucocyte antigen (HLA) class II and class I molecules, respectively (Miceli & Parnes, 1991). The complex of T-cell antigen receptor and CD3, CD4, and CD8 proteins physically associate with and activate several intracellular protein tyrosine kinases, resulting in mobilization of ionized calcium from intracellular bound stores by inositol trisphosphate. The increased intracellular free calcium and sustained activation of protein kinase C promote expression of genes central to T-cell growth. Cytokines are a family of peptide molecules that are responsible for direct cell-to-cell communication. They mediate interactions between leucocyte populations and between leucocytes and tissue cells. Cytokines of the IL family, derived from APC (namely, IL-1 and IL6), also provide costimulatory signals that result in T-cell activation. T-cell-derived lymphokines (e.g., IL-2 and IL4), and contact between T- and B-cells through specific pairs of receptors and coreceptors, provide signals essential for B-cell stimulation (Clark & Ledbetter, 1994). T-cell proliferation is the result of IL-2 expression that is dependent on T-cell activation. The net effect of cytokine production is the emergence of antigen-specific, tissue infiltrating, and destructive T-cells.

Cytokines also activate macrophages and other inflammatory cells and the production of antibodies by stimulated T-cells. Cytokines can amplify the ongoing immune response by up-regulating the expression of HLA antigens and costimulatory molecules (such as B7) on parenchymal cells and APC. The costimulators direct T-cell differentiation, for example, into a CD4+ Th1 cell, which secretes lymphokines, facilitating CTL killing of cells, or differentiates into a CD4+ Th2 cell, which observed during graft rejection will apply to transformed cells as they become carcinogenic.

We help biotech and pharma companies deliver their ideas to the World within Time and Budget!
Our capabilities ↙️

SEO can be impacted by several factors, for instan

How much does a medical animation cost? It’s a q

Are you using Veeva CRM? Are you concerned about t